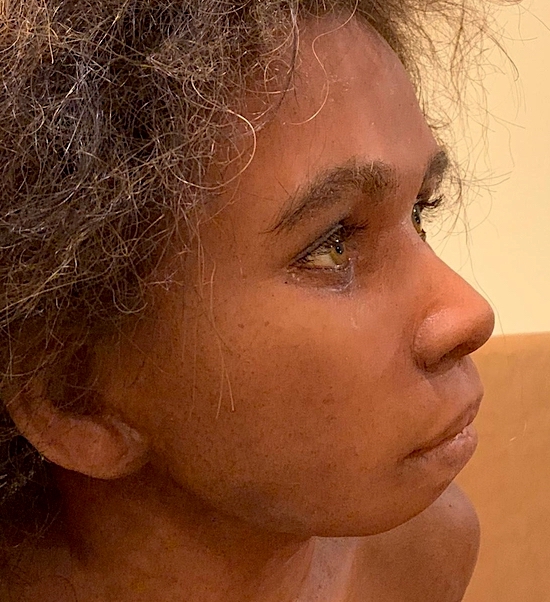 In 2014, one of the oldest human remains in Italy was discovered in the prehistoric site of Isernia La Pineta, a tooth of a child belonging to a different species from ours. Today a magnificent sculptural reconstruction reproduces the child who lived in Molise about 600,000 years ago.

In 2014, in the prehistoric site of Isernia La Pineta, the research team of prof. Carlo Peretto (University of Ferrara) discovered the oldest human tooth in Italy.
The tooth, a small incisor of a 5-7 year old child, has been attributed to Homo heidelbergensis, the ancestor of the Neanderthal man, attested in Europe from about 600,000 years ago.
A fundamental discovery not only for Molise but for Italy and Europe, considering the scarcity of human fossil remains referable to this period.

A lot of information can be obtained from a tooth, more than you can imagine. Today a magnificent sculptural reconstruction by the French paleoartist Élisabeth Daynès, reproduces the child who lived in Molise about 600,000 years ago.
Painter, sculptress and expert in comparative anatomy, Élisabeth Daynès has created a unique and specific model of the child, based on the scientific studies carried out in recent years by a research group of the University of Ferrara.
The skull model was created by Antonio Profico, a young Italian researcher now in the Archeology Department of the University of York (England).
It is a real artistic and scientific masterpiece that will be exhibited in the National Paleolithic Museum of Isernia.

Sea holidays: discover the most beautiful beaches in Molise

Luigi Gamberale was a professor, writer, principal and translator, born in Agnone in the first half of the...

Ready to discover the masterpieces of eighteenth-century painting in our region? The works of Paolo Gamba, linked...