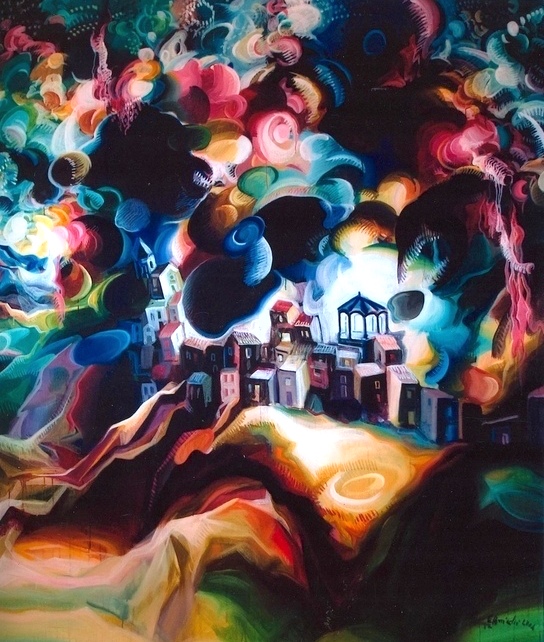 The expressionist works of the painter Antonio Pettinicchi, an important Italian artist of the twentieth century, born and lived near Campobasso, will allow you to discover the secrets of peasant Molise. The very personal illustrations for Divina Commedia populated by Molise peasants and the characteristic engravings on San Giuseppe in Lucito will guide you on this journey.

The painter Antonio Pettinicchi was born in 1925 in Lucito, in the province of Campobasso, and trained at the Academy of Fine Arts in Naples, soon approaching the world of the avant-garde and in particular German Expressionism. The artists who inspire him most are Guttuso, Cèzanne, Bacon and Picasso, although Pettinicchi soon reaches his own personal style characterized by liquefied figures and violent colors able to communicate the tragedy of the world.

What are the painter’s favorite subjects? These are mainly scenes related to the peasant world set in Lucito, the hometown that he will never leave and that he will love for a lifetime. The figure of the molisan peasant acquires a new dignity on the canvas, that do not want to arouse social reflections but rather to evoke ancestral feelings. Emblematic is the artist’s choice to include the peasants in the 87 paintings created in 1994 to illustrate Dante’s Comedy; his fellow villagers, however, are present only in the scenes referring to Paradise, while Hell is populated by figures belonging to the bourgeois class. Pettinicchi also successfully dedicates himself to engraving and in this field the series dedicated to St. Joseph’s Day, particularly dear to the artist since childhood and still celebrated in Lucito, is very famous.

The strong attachment to his land does not make Pettinicchi’s work of exclusive regional interest but on the contrary allows the world to discover a precious and little known territory through the direct language of the artist.Antonio Pettinicchi will in fact participate in many editions of the Venice Biennale and the Rome Quadriennale and his works will be acquired by numerous public and private museums, including the Uffizi in Florence, the Pushkin Gallery in Moscow, the Altes Museum in Berlin and the British Museum in London.

Here is what the painter said about Molise: «I am attached to my land and to the men who live there and I try to make them talk with my work. They already possess the expressive force, the tragic, the dramatic and also the sense of peace. I like the obsessive silences of late morning backlighting or the nights full of nightmares and remote things along the ravines and cracks of this land. In the things that lie before me there is the real, the surreal and the essential».

Trivento, the city of crochet

Honey in Molise: the community apiary of Castel Del Giudice

Trivento, the city of crochet

Trivento is little village in which in a short time has become the ‘world’s capital of crochet’. Find out how this...