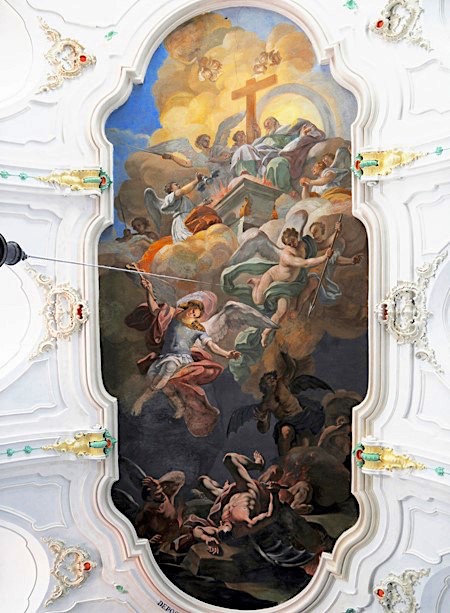 Ready to discover the masterpieces of eighteenth-century painting in our region? The works of Paolo Gamba, linked to the Neapolitan Baroque, are the undisputed protagonists and most of them can be easily admired in some churches in the province of Campobasso and the village of Agnone.

Born in the village of Ripabottoni in 1712, Paolo Gamba learned the fresco techniques from his father, a mannerist decorator active in Sulmona, and then he continued his studies in Naples at the school of Francesco Solimena.
His works, in the standardized repetition of Marian subjects, attest the painter’s affirmation in the context of local ecclesiastical commissions. Hasty brushstroke, clear palette, scenographic system not always supported by the correctness of the drawing bring the works close to those of the typical Neapolitan Baroque. The assimilation of the teaching of the master Solimena is evident, together with the influences of Luca Giordano and Giovanni Lanfranco.

Paolo Gamba has left his unmistakable mark in many Molise towns. If you are in the province of Campobasso do not miss the opportunity to admire numerous decorative interventions made in the fruitful context of cultural renewal promoted by the bishops of Tria family: from the majestic dome of San Francesco in Larino, with the frescoes of the Immaculate Conception and the Evangelists signed and dated 1747, to the canvas in the parish of Montorio nei Frentani; from the beautiful Madonna of Purgatory in San Giovanni Battista in Colletorto in 1751 to the Virgin and Child in Santa Maria Maggiore in Casacalenda.

However, if you are curious to explore the painter’s hometown, Ripabottoni, you will be amazed going in the church of Santa Maria Assunta, renovated between 1731 and 1744 by Ferdinando Sanfelice. The frescoes of eleven personifications of the Virtues in the plumes of the central nave and the four paintings in the side altars, including the valuable San Rocco, are by the master.

After short works carried out in Puglia and Abruzzo, the artist returned to Molise to complete his last great undertaking in the church of San Francesco in Agnone. The frescoes are placed in a rococo-style stuccoed environment to cover the entire space of the church, but the most majestic composition is in the vault with the Fall of the rebel angels(opening photo), copied in part from a canvas that Solimena had painted for the parish of Ripabottoni. In the upper part of the scene a limpid light frames God seated on the throne, in the lower one an armored archangel St. Michael repels the damned with bat wings towards the dark abysses dominated by Lucifer. 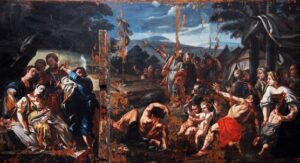 Gamba had already been called in Agnone to paint the biblical episode of the Bronze snake (photo on the side) in the church of Santa Croce, characterized by very emphatic tones and a wonderful chiaroscuro effect.

“Illumina e vinci”: the competition to enlighten Christmas in Molise

On the trail of Liberty in Campobasso

The soul of Molise in the artworks of Domenico Fratianni