Venus of Venafro comes back home 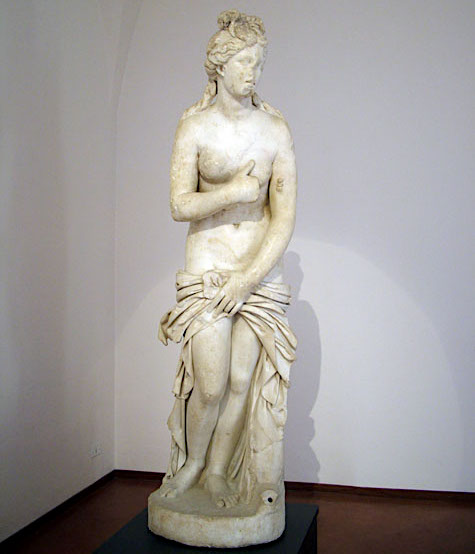 The beautiful statue of the Archaeological Museum of Venafro returns to our region after a long lending period to the Museums of San Domenico in Forlì, on the occasion of the acclaimed exhibition ‘Ulisse. L’arte e il mito’.

The antoninian Aphrodite was accidentally found in 1958 near the Amphitheater of Venafro and it represents a well-preserved example of a Roman copy, openly inspired on the Praxitelean model. The goddess is covering herself immediately after her birth from the sea and she’s avoiding the viewer’s look, turning slightly her head to the left. Pronounced body characterizes the work which now seems to portray a submissive woman, completely devoid of divine attributes.

The dolphin on the right side presents an internal conduit and it establishes the statue was part of a fountain, most likely located in an urban villa garden. So we can deduce that in the imperial age Venafro was a very important center, in such close relations with Rome that it adopted its most luxurious ornamental traditions.

After October 31st, Venus will take her way home from Romagna and it will wait for you in the museum of Venafro again, ready to tell the story of a region that can still amaze.

Agnone: ‘venetian village’ in the heart of Molise

Croats and Albanians in Molise

Did you know that in Molise there are Croatian and Albanian communities?

A fairytale castle in Molise: the castle of Cerro al Volturno

The castle of Cerro a Volturno is one of the most beautiful castles in Molise. It stands on the top of a spur of...