The ancient craft of “ru mpagliasegge” 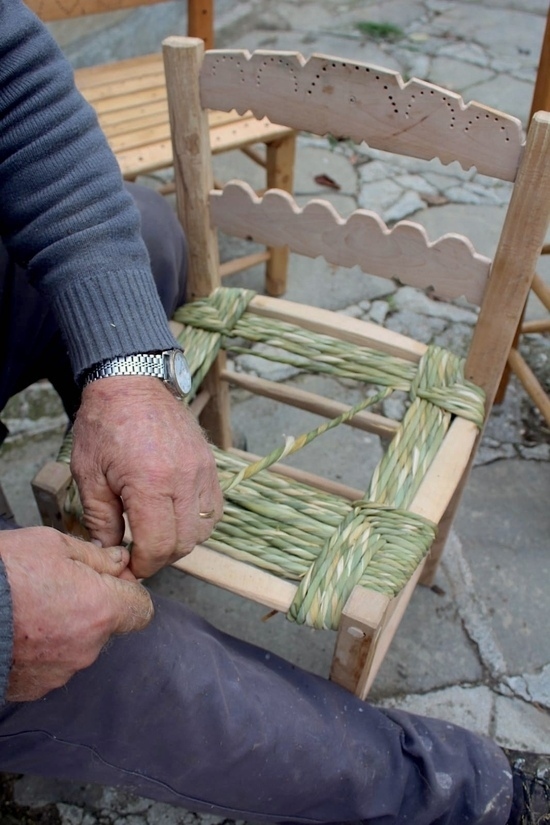 The artisan tradition of the construction of chairs was widespread in past centuries mostly in the mountainous areas of Molise, where the necessary raw materials were readily available: rushes of straw and beech wood. Today the profession of “ru mpagliasegge” has instead turned into a pastime that remains alive especially for the production of furniture for family use. 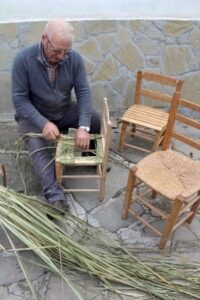 R mpagliasegge or straw artisans worked on the construction of chairs but also on the repair of old ones, for those who were unable to buy new ones. The profession was learned from parents or grandparents but also independently by observing the woven of the chairs owned in the house.
The materials needed for this production were mainly two: beech wood, a common tree in the forests of upper Molise, and straw rushes, easily found along the banks of rivers, streams and in swampy environments. After the drying of the wood, it was cut into planks that formed the frame of the chair; the rushes also had to undergo a drying process lasting about three months, in an environment not exposed to direct sunlight which would have weakened the plant fibers.
At this point the rushes were skilfully intertwined on the frame to make the seat, starting from the edges of the same to get to the central part; only the long experience in handling fibers protected the craftsman from painful cuts that could be caused by dried rushes. Finally, the frame was polished and some decoration was made: in addition to the coloring of the wood, drawings and writings were often added, outlined by small holes on the back, which documented the date, the craftsman and receiver’s name.

Today the artisan tradition has been replaced by mass production but older people continue to produce these objects of great qualitative and sentimental value: very resistant and customizable chairs to give to the family, which can arouse the memory of an ancient profession in the younger generations.

Pesche: the crib village of Molise

The ‘ndocciata in Agnone, heritage of Italy for the tradition

On December 8th and 24th the appointment with the most powerful and suggestive Christmas tradition linked to the...

Ancient carnival masks in Molise: the deer-man of Castelnuovo a Volturno

A carnival ritual that has been perpetuated for a long time in the heart of the mountains of upper Molise.