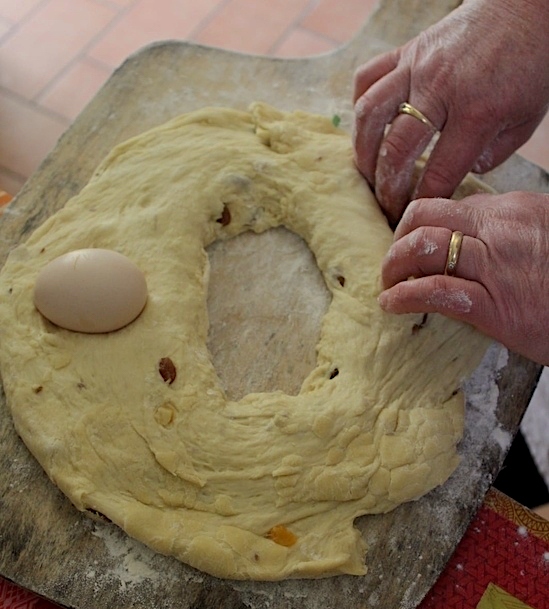 The “cucuruozzo” is a typical Easter cake of Molise, still made today according to an ancient recipe of peasant origin based on very simple ingredients: eggs, flour, potatoes, oil, milk and sugar. The dough is then modeled in various ways to create different shapes: the classic donut, the “pipotta” or the horse. Get the recipe!

The recipe of “cucuruozzo” or “piccillato” from Molise has very ancient origins and it is believed that the tradition was born in the area of ​​upper Molise and then it spread throughout the region. For Easter, peasant families prepared this soft and fragrant dough with a few simple ingredients: eggs, flour, potatoes, oil, milk and sugar. However, the mother yeast, which was usually used in country houses for the preparation of fresh bread, was fundamental for the preparation. Even today the “cucuruozzo” is prepared with these ingredients in respect of tradition.

After rising, the dough is easily shaped by hand and the “cucuruozzo” takes on various forms: the classic one of the donut, that of the “pipotta” (“doll” in Molise dialect) more captivating for children or that of a horse. Often as a decoration on the surface of the dough there are also whole eggs, the Easter symbol par excellence.

If you want to try to prepare the “cucuruozzo”, follow the simple recipe of aunt Maria Rosa! 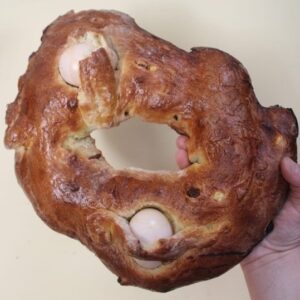 Preparation
Peel and boil the potatoes in boiling water until they become very soft. Mix them with the cooking water to create a sort of puree.
Then start preparing the dough by mixing 5 eggs, sugar, oil, milk, 3 ladles full of the previously prepared mashed potatoes, yeast, raisins and flour. The consistency obtained must be similar to that of potato gnocchi; then add some flour if the dough is too liquid.
Let the dough rise in a dry place for about 12 hours and then knead the dough to create the shape you like best. To decorate you can add whole eggs on the surface which, once in the oven, will cook together with the cake becoming hard-boiled. Beat the remaining egg and brush the “cucuruozzo”; then bake it and cook for about an hour at 180 degrees.

Le Mortine oasis: a natural paradise between Molise and Campania

Civitacampomarano: an open-air museum in Molise

Most people will have heard of the Sicilian ‘caponata’, but few know the ‘caponata’ of Molise. A single dish with...

Discover the typical first courses of Campobasso. A simple cuisine that, despite the changes and the progressive...