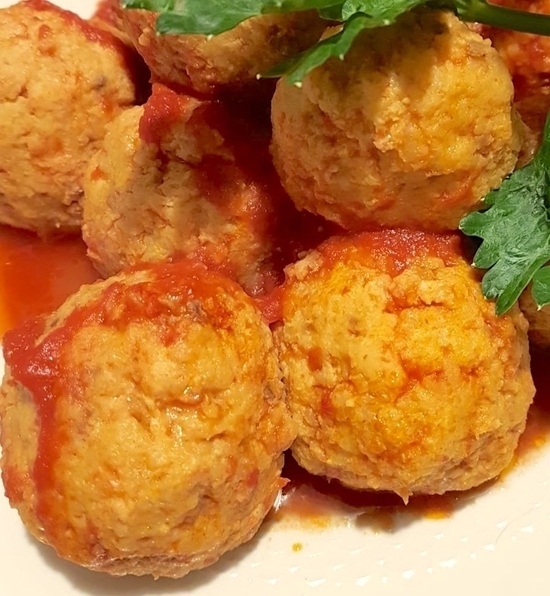 A poor dish of pastoral origin, born from the need to put protein sources on the table despite the lack of available meat, today “pallotte cacio e ova” are still one of the cornerstones of Molisan culinary tradition.

The indispensable ingredients for the realization of this recipe are stale bread, pecorino cheese, eggs and parsley, simple flavors linked to the rite of transhumance and the poverty of peasant houses in the past. The “pallotte” allowed a tastier reinterpretation of available raw materials and they avoided any kind of waste in the kitchen, through using of dry bread.

This dish remained on the Molisan tables even later, until it became part of a well-established food tradition in the territory. Today there are many variations on the standard recipe. “Pallotte” from Trivento, a small village in the Trigno valley, are prepared for Carnival parties with the addition of dry sausage in the dough and cooking in tomato sauce or broth. Those from Termoli and Indiprete, known by the name of “scescille” and characterized by a more elongated shape, can be cooked in tomato and pepper fry.

What is the difference between Molisan “pallotte” and Abruzzi or Apulian ones? In Abruzzi the recipe requires to fry them in boiling oil before dipping them in the sauce; in Apulia the bread used has a less aerated and more compact crumb which gives greater solidity to the dough. Finally, tradition has it that the “cacio e ova pallotte” are even the ancestors of Latium carbonara, born by replacing pasta with bread in the recipe.

What are you waiting for to try them? Anti waste, easy and tasty, the “pallotte” will be ready in less than an hour following our recipe dictated directly by a Molisan grandmother!

Chop the sausage roughly and the stale bread more finely. Combine everything with the eggs, parsley, grated pecorino and a pinch of salt, mixing until you obtain a homogeneous mixture. Form the “pallotte” with slightly wetted hands and place them on a tray.
Then heat the oil in a saucepan together with onion and celery, finally adding abundant tomato sauce. Wait for the sauce to boil to place “pallotte” on the fire so that they do not touch each other and that tomato completely covers them. Simmer for 45 minutes.

Caciocavallo: the king of Molise cheeses

With its characteristic pear shape and its unique flavor, caciocavallo is the king of the typical cuisine in Molise.

Traditional recipes in Molise: the ‘Pizza Scema’ of San Martino

In some villages in Molise, on the occasion of San Martino, on 11 November, the ‘pizza scema’ is prepared, a very...