Molise of ‘Morge’: a path in the Molise nature 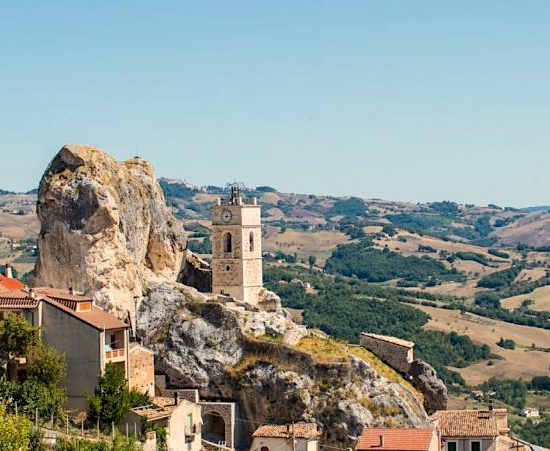 The ‘Morge’ are sedimentary formations with ancient origins, which are a feature of a part of the Molise territory. Find out with us the Cenozoic Park of ‘Morge’ in Molise.

Million years ago, in the Cenozoic era, some sedimentary stones formed in marine environments have arisen from the tectonic movements of the Earth’s crust; that’s why they are rich of fossils. These stone formations in Molise are named ‘Morge’ and around them has born the Cenozoic Park of ‘Morge’ in Molise, which includes some of the villages between the Trigno’s Valley and the Biferno’s Valley: Pietracupa, Trivento, Salcito, Bagnoli Del Trigno, Limosano, Sant’Angelo Limosano, San Biase, Montefalcone nel Sannio, Roccavivara, Oratino e Castropignano.

Pietracupa is the village which best represents the ‘Morge’; with only 200 inhabitants, Pietracupa is also known as “The Bethlehem of Molise” for its special conformation with caves which developed in the Morgia and that now characterizes the residential area.
Then there is the Morgia of Pietravalle in Salcito with its artificial caves clearly datable to an ancient settlement.
The Morgia of Pietra Martino is the ideal to practise sport activities like rock-climbing.
But it does not end here: for the adrenaline sports lovers the village of Montefalcone offers activities like paragliding to enjoy a breathtaking panorama from which you can see also the Church of the Madonna del Canneto in Roccavivara.
Finally, don’t miss “la Rocca” of Oratino, dating back to the Bronze Age.

As you have noticed, that of Morge’s Park is a wide and variegate path which presents natural, historic and cultural features worthy of note. It’s enough to walk it to understand the variety of histories, cultures and traditions that these areas of Molise can preserve.

CondoArt: the “art condominium” in the heart of Campobasso

Discover the wildest beach in Molise

If you are looking for a free and uncontaminated beach, with a wild and uncrowded charm, Marina di Petacciato is...

A new nature reserve in Molise

A new nature reserve is born in Molise: the naturalistic oasis of Casacalenda (Campobasso) becomes a regional...