Castelpetroso: a fairy-tale church in Molise 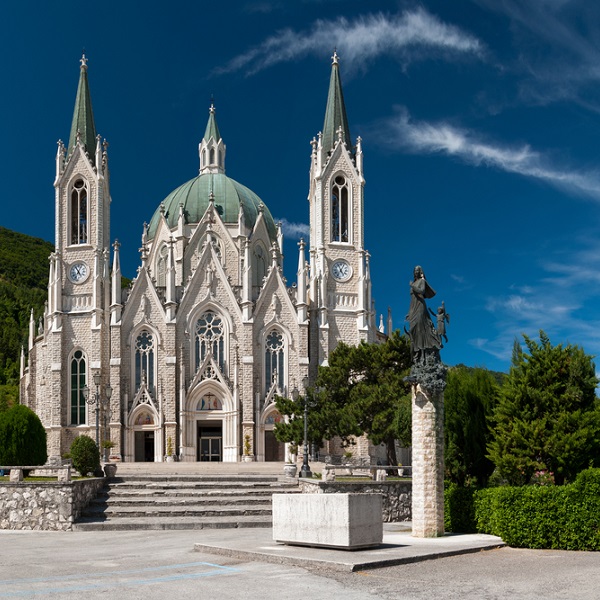 We are in Castelpetroso, a village of Molise in province of Isernia which counts around 1600 inhabitants. This village hosts a spectacular Church which seems to be come out from a fairy. It’s the Church of Maria Santissima Addolorata. Let’s find out together this important attraction of the religious tourism in Molise.

The history of the church of Maria Santissima Addolorata in Castelpetroso started the 22 March of 1888, when one countrywomen, who was searching a lost sheep, had a celestial vision: in the bright light, the woman recognised the shape of the Virgin kneeling with her dead son at her feet, the upward glance and the arms outstretched in sign of offer. In September of the same year, the bishop Francesco Macarone Palmieri from Bojano went to this sacred place to investigate on what happened and also him had the same vision. So it was that the works for the building of the Church started in the 1890 and in the 1975 there was the consecration.

The architecture in a neogothic style of the Church, entirely sculptured with local stone, was projected by Francesco Gualandi from Bologna and it presents a plant that symbolize an heart afflicted by seven swords, a picture which embodies the pain of the Virgin. What strikes many pilgrims is not only the presentation of the places where there were the visions during the years, but also the path which conducts to the Church that presents a natural and religious character at the same time because it is focused on the theme called “discover themselves, a voyage with the young Tobia”. The path, infact, is characterised by eleven wood panels and each one of them describes a phase of the walking of Tobia (a spiritual walk taken by Tobia who, followed by an angel, ventures into the unknown after which he returns changed and enriched).

The landscape that frames the Church and its particular architecture mean that this Church is considered today a fairytale place, a must-see of Molise for religious people and nature amateurs.

The façade of the neogothic Church in Castelpetroso (province of Isernia), surrounded by nature (web).

Places to visit in Molise: Agnone

Agnone is a beautiful mountain village, famous for its churches, historic buildings and for the oldest Italian...