The ancient art of Molise weaving 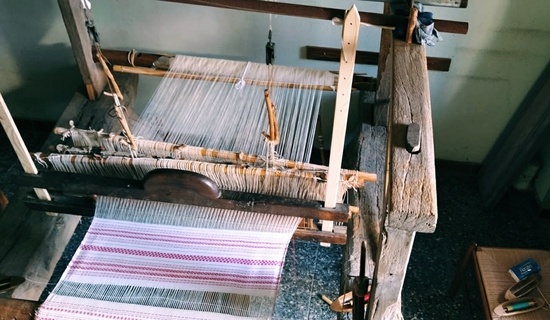 That of the loom is a real art which dates back thousands of years before the Christian era. An art that is still jealously preserved in Molise, based on the use of ancient handcrafted wooden frames for the textile processing such as cotton and linen.

In some villages of Molise the ancient art of weaving is still jealously preserved. We are in Montemitro, a linguistic Croatian minority in province of Campobasso, where the loom is used to create fabrics and canvas decorated with a strange motif called in na-naŝo language “serpitiel”.

How does the weaving work? Firstly, we proceed by the warping which is the interweaving of the two threads called texture (positioned horizontally) and warp (vertically). The warp is the combination of tight wires on the frame which determine also the width of the fabric. The texture is the set of threads which are intertwined with the warp in a perpendicular direction. The interweaving between the warp and the texture works thanks to some elements that constitute the frame. Among them there is the “heddle”, which permits to select and raise simultaneously a series of threads and also to easily introduce the texture between them. This process of insertion of the texture works through the “loom-shuttle”, part of the frame which is passed back and forth between the threads of the warp.

That of the frame is a complex technique that can be learned only with time and patience. Nowadays there are few women able to use it, but at the same time they are able to create proper works of art which represent the result of a secular tradition whish still resists.

The “golden” Molise, between ears and grains of wheat

Campobasso hosts the tenth edition of the prestigious exhibition dedicated to contemporary engraving, in honor of...