The “golden” Molise, between ears and grains of wheat 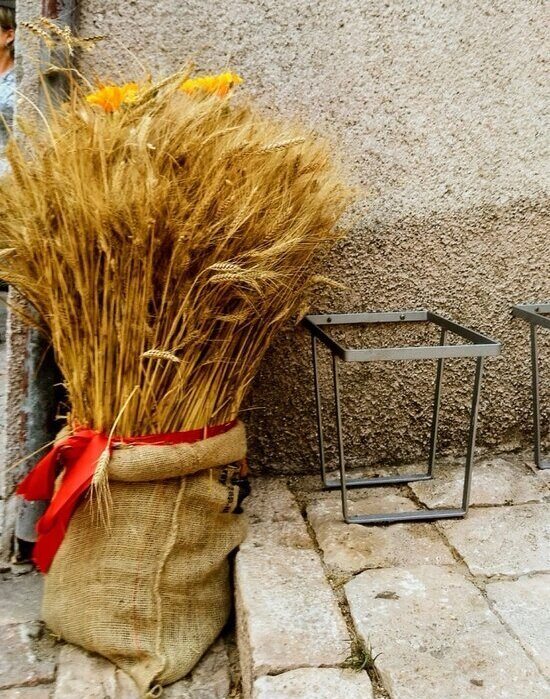 Between July and August, in many villages of Molise there is the celebration of ancient traditions linked to the wheat. Discover the “traglie” parade in Roccavivara, held on 5 August in honor of Sant’Emidio.

In the small village of Roccavivara, in province of Campobasso, the feast dedicated to the Saint Emidio is celebrated every 5th of August. This saint is considered the protector of earthquakes and his devotion is originally from Ascoli Piceno. In the XIII century, the cult of Saint Emidio spread thanks to the trade relationships between the citizens from Ascoli and the citizens from Molise (in particular in the area of Agnone). The devotion to this Saint became stronger in Roccavivara after the destructive earthquake of the 1805, when, according to a popular legend, during the procession dedicated to Saint Emidio, despite the strong earthquake, the houses remained intact (compared to all other neighbouring villages). From that moment, the saint became patron of the village and protector of the earthquakes.

Every year, during the end of July, the village starts to be full of golden decorations with ears and handmade braids of wheat. A parade with the so called “traglie” (meaning floats decorated through wheat)dedicated to the saint is organized on the 5th of August.

This year, due to the pandemic situation, it was impossible to organize the parade with the floats. By contrast, the citizens have decided to celebrate the feast, adorning the village with handmade wheat decorations. A wheat braid marks the record of 310 meters and links the whole historic centre. Moreover, there will be an open-air exposition in the principal square consisting in panels decorate with grains of wheat placed carefully which represent significant elements of the cultural heritage of Roccavivara. You just have to go to this small village where, right in these days, streets, squares and alleys are coloured with gold.

Wheat feast in Roccavivara (province of Campobasso. Typical decoration through the alleys of the village (photo: R. Sallustio)

The ancient art of Molise weaving

On the 31st of May, the “Infiorata” takes place down the streets of the old town of Campobasso.

“The game of plates”: an ancient game from Molise

The “game of plates” is a game with ancient origins which is still played in some villages of Molise: in Montemitro...